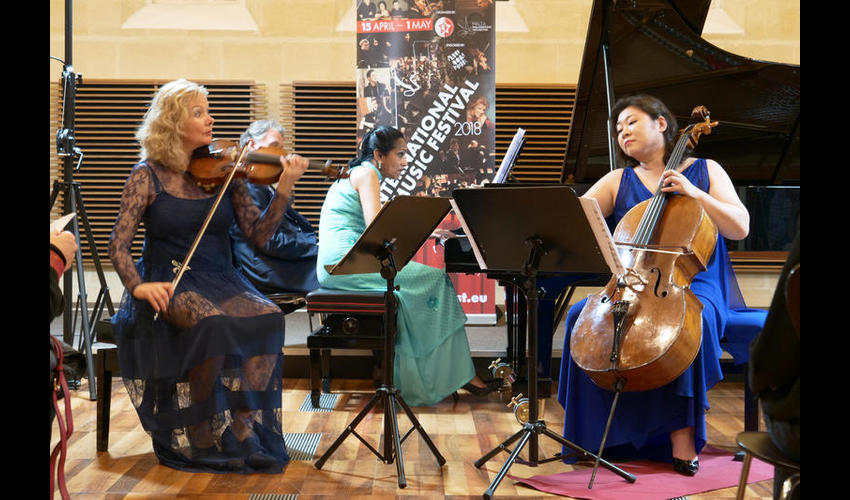 It is useless to search for any similarities with Johann Strauss the Younger’ operetta – for we are speaking about a Viennese trio with all-female participants who performed works of the Great Trinity namely Haydn, Beethoven and Schubert. Adding to their wonderful music an opus of the Maltese composer Joseph Vella which perfectly blended with the programme. It is interesting to note that Joseph Vella is a namesake of the first Viennese classic.

Cosmopolitan Trio Vienna is a true symbol of Wean (Austrian pronunciation of “Wien”), a cosmopolitan city, where waltz, and march, and csárdás, and landler, and verbunkos, and polka, and Gypsy violins, and, of course, champagne splashes created an incredible mix; a city filled with melodies from all over Europe and at any time ready to exchange its comfortable patriarchal existence to a simple-minded naive fun. That’s what happened in the cosy little concert venue in Floriana – an ex-Methodist Church (vaults, acoustics, crystal chandeliers included).

The ladies trio was a rather intricate ensemble, which consists of the Austrian violinist Elisabeth Kropfitsch, the Indian pianist Marialena Fernandez and the Korean cellist Meehae Ryo. This clearly indicates that they are cosmopolitan truly. Especially since they all live in Vienna; hence, in their arteries and, of course, veins one finds real Vienna blood – a heady mix of ages, races and classes.

The Cosmopolitan Trio Vienna’s concert was, first of all, incredibly vivid, and secondly, resembled a hedonistic act filled with everything beautiful, bright and joyful. Where Beethoven does not claim to sound significant, composing variations on a popular theme from Joseph Weigl “L’amor marinaro,” for what his B-flat trio op. 11 was actually named Gassenhauer – for its melody was chanted and whistled by idlers of Vienna (by the way, the modern equivalent of the term “gassen” is a “hit” or “schlager”). Where Haydn in the finale of his G-major trio No. 39 flirts with “Hungarian” style, for what his opus was nicknamed “Gypsy.” Where Schubert even in the last year of his life feels in B-flat major and allows the violin and cello to have a good chat. Where Joseph Vella, a Gozitan who has recently passed away, composes Romanza for his own son’s nuptial mass, showing himself to be a true lyricist and a romantic of broad breathing.

The most heartfelt was, however, the encore “Schubertango” by the contemporary Maltese composer Alexey Shor – a delightful joke, a real example of postmodern irony, where the rhythm of tango embraces a Leise flehen meine Lieder Durch die Nacht zu Dir, and other serenades, so Piazzolla’s “Libertango” inevitably arising in your mind, does not appear as a simple allusion. And you know, in this very moment it became crystal clear, that naturally joyful perception of life has not been lost forever by us, who live in this complex world, which nevertheless remains full of harmony.

Фестиваль Science in the City